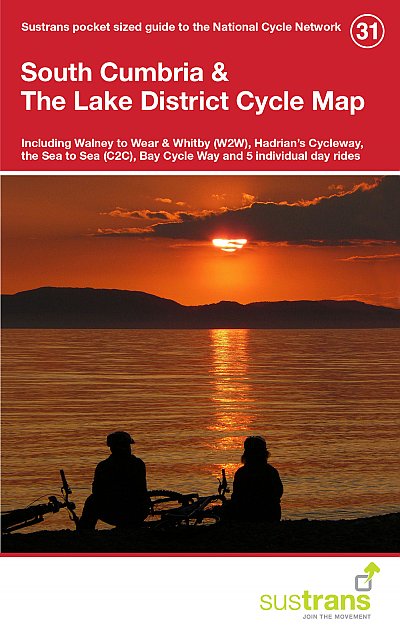 This area map shows the National Cycle Network and local routes in this area. It covers South Cumbria and the Lake District National Park in the north west of England, including Workington, Barrow-in-Furness, Kendal, Keswick, Penrith and Appleby-in-Westmorland.

National Route 72 between Ravenglass and Allonby via Whitehaven and Workington. This forms the beginning of Hadrian’s Cycleway.

National Route 71 from Workington to Appleby-in-Westmorland via Cockermouth, Keswick and Penrith with an arm from Cleator Moor to Thornthwaite. This makes up the western third of the C2C route.

National Route 7 between Welton and Leadgate via Penrith.

National Route 70 between Barrow-in-Furness and Kirkby Stephen. This forms the principle route of the Walney to Wear and Whitby (W2W) long distance ride.

National Route 68 between south of Sedbergh to Leadgate via Appleby-in-Westmorland. This makes up part of the Pennine Cycleway.

National Route 6 between Yealand Storrs and Ambleside via Kendal and Windermere.

National Route 700 between Barrow-in-Furness and Silverdale. This makes up part of the new Bay Cycle Way.