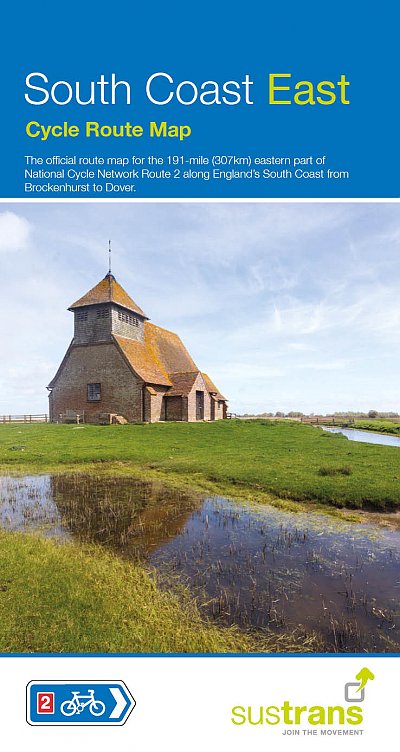 This is the official South Coast East Sustrans cycle map for the 191-mile (307km) eastern part of National Cycle Network Route 2. It runs along England’s South Coast from Brockenhurst to Dover.

It follows on from the Sustrans South Coast West map, which starts in Devon and finishes at Brockenhurst in Hampshire. The eastern section starts at Brockenhurst, deep in the New Forest. It skirts Southampton and Portsmouth before leading through West and East Sussex into Kent.

This part of the South Coast Route (NCN2) is almost entirely flat. Although there are no big hills to tackle, that means there hardly any down-hills to relax on either. So make sure you take plenty of breaks on this spectacular stretch of England’s south coast.

Fortunately there is plenty to see and do along the way.

Four ferries – across Southampton Water, the River Hamble, from Gosport to Portsmouth, and onto Hayling Island – will also help take some of the strain. Pause and take in the historic naval dockyards of Southampton and Portsmouth. Marvel at the mosaic remains of Fishbourne Roman Palace. Enjoy beautiful Chichester with its stunning cathedral.

From there the route heads coastwards where you ride along the promenades of Bognor, Littlehampton, Worthing, Hove and Brighton with all their Georgian and Victorian splendour.

Once you rejoin the coast you ride through more quintessential English seaside towns including Eastbourne, Bexhill and Hastings.

There the ancient region of `Cinque Ports’ begins as does the big-skied, sparsely populated wetland area of Romney Marsh.

Out of Folkestone you tackle the only real climb of the route over the Kent Downs, before being instantly rewarded with a view of Dover, the end of your ride.