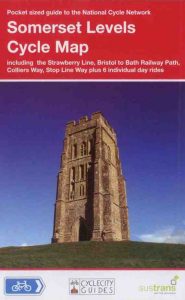 These following routes are covered on the Somerset Levels Sustrans cycle map:

The map also shows 5 circular day rides with instructions on how to follow them from cycle writer Nick Cotton.

This area map shows the National Cycle Network and local routes in this area. It covers the Somerset Levels area of the South West region of England, including Bristol, Bath, Glastonbury, Wells, Minehead and Yeovil.

The Somerset Levels is excellent for cycling. Sandwiched between the Mendip and Quantock Hills are flat pleasant cycle routes in the Levels, a coastal plain and wetland area so called for its flatness and home to many fascinating towns like Glastonbury and Wells. The iconic Glastonbury Tor can be seen for miles around and the town has a real spiritual feel; Wells is home to a 12th century cathedral and much other historic architecture. Cheddar Gorge, famous in its own right for its stunning views, caves and cheese making traditions, is the end point for the family friendly Strawberry Line between Yatton and Cheddar.

These major routes are covered on the map:

National Route 339 – The Stop Line Way from Weston-super-Mare to Ilminster.

National Route 24 – The Colliers Way between Radstock and Frome.

National Route 410 – the Avon Cycle Way – the Southern half of this route.

National Route 26 from Yeovil to Glastonbury.

This is also an excellent map for cycling to Glastonbury Festival from its surrounding area.