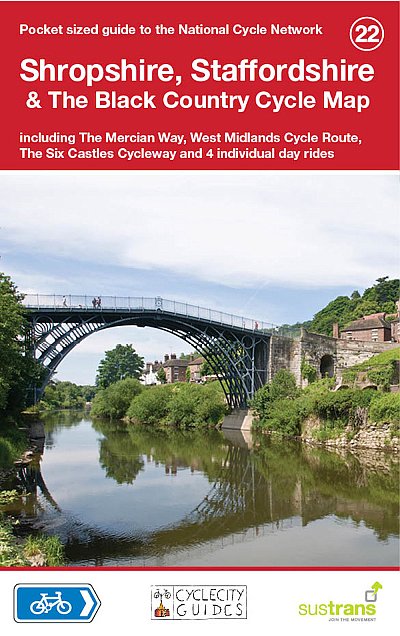 This area map shows the National Cycle Network and local routes in this area. It covers the Shropshire, Staffordshire & the Black Country area of the Midlands region of England, including Birmingham, Stafford, Shrewsbury and Telford.

Located on the England-Wales border, Shropshire has a long history of mining and industry, embodied by the stunning Ironbridge Gorge, now a World Heritage site. The south of the county has significant hill ranges, river valleys and woods. Staffordshire incorporates wild moorlands and the beautiful forest of Cannock Chase, and the important pottery centre of Stoke-on-Trent as well as the Black Country, the industrial area to the north-west of Birmingham.

National Route 5 between Birmingham and Lichfield, and between Stafford and Stoke-on-Trent.

National Route 55 between Stafford and Colaport via Newport and Telford.

National Route 45 between Alveley and Bickley Moss via Bridgnorth, Ironbridge, Shawbury and Whitchurch.

National Route 81 between Birmingham and the England Wales border via Wolverhampton, Telford and Shrewsbury.

National Route 44 between Shrewsbury and Craven’s Arms via Bishops Castle.

Regional Route 75 between Newport and Sound via Market Drayton and Audlem.

Regional Route 31 between Oswestry and Welsh End via Gobowen and Ellesmere.