New edition due August 2021. You can pre-order here.

This is an excellent double-sided map of the North York Moors showing suggested cycle routes.

The North York Moors National Park occupies a region of elevated rolling moorland, forming a steep escarpment on the north and west, and a rugged indented coastline to the east.

To the south, the ground slopes more gently towards the Vales of Mowbray and Pickering.

The Moors are cut up by a series of small streams, deeply incised to create a landscape of real charm. These flow down to the Vale of Pickering. Each Dale having its own characteristic: Scenic Ryedale, lonely Bransdale, the daffodils of Farndale, the industrial echoes of now quiet, Rosedale.

To the north, the River Esk cuts a swathe eastwards on its way to Whitby. To the south, the Howardian Hills, and The Wolds, make for fine cycling: rolling hills with lanes connecting picturesque villages. For the less strenuous, the Vale of Pickering makes for an easy-going ride: quiet, flat lanes through a pastoral landscape. 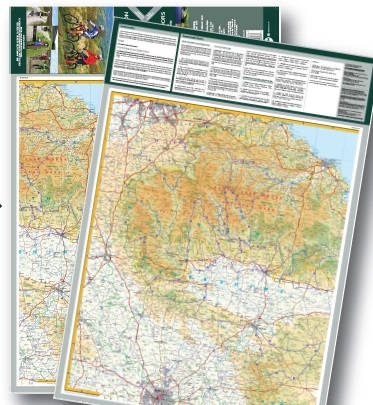