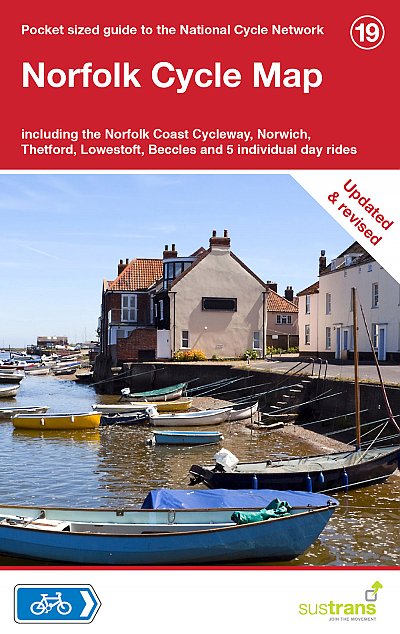 The Norfolk Sustrans cycle map 19 is in the series of pocket sized, folded maps to the National Cycle Network which include clearly mapped on-road and traffic-free paths, easy to read contours and detailed town insets. The series is published by CycleCity Guides in partnership with Sustrans. 1:110,000 scale; folded 155mm x 99mm; flat 792mm x 630mm.

This area map shows the National Cycle Network and local routes in this area. It covers the Norfolk area of the East of England, including Norwich, Cromer and Sheringham, Great Yarmouth and Dereham.

Norfolk is very flat which makes it ideal for cycling. Miles of unspoilt coastline, internationally important nature reserves and amazing wildlife are all linked together with fantastic signed cycle routes and a network of quiet country lanes. Inland you can also explore Thetford Forest, with hundreds of miles of single track and mountain bike routes, and the pretty city of Norwich, the county town and home to many great pubs, cafes and parks.

National Route 13 between Thetford and Fakenham via Watton and Dereham.

Regional Route 30 between Brandon and Lowestoft via Thetford (through Thetford Forest), Harleston and Beccles.