Guide book to LEJOG in 14 stages including full mapping, accommodation and bike shops on the way. 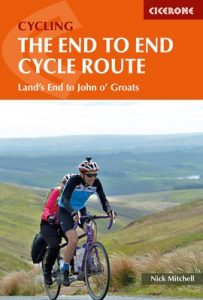 Thousands of people cycle the UK from end to end every year, for charity or just for the challenge. This book offers a comprehensive guide to a tried and tested cycle route from Land’s End to John o’ Groats (LEJOG), designed to avoid the busier A roads and take in the best scenery from Dartmoor to Dounreay.

The junction by junction description of the Land’s End to John o’ Groats cycle route, is in 14 day stages averaging just over 70 miles, illustrated with clear customised OS mapping and profiles so riders know exactly what to expect. All the grid key references are included for use with GPS navigation devices (or conventional maps).

The end to end cycle route can be tackled at any time of year, although good weather and clear visibility will make a far more enjoyable experience. The best time to cycle the route is from late March until late October, when the days are longer and warmer.

The route takes in some stunning areas of Britain including Dartmoor, the Welsh Marches, the Lake District, Loch Lomond and the Great Glen, cycling through National Parks, AONBs and SSSI on the way, and key historical features are described along the way.