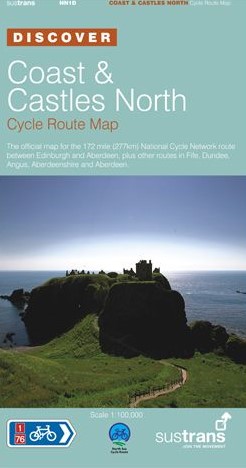 The Coast and Castles North is a 170 mile coastal route from Edinburgh to Aberdeen.

The Coast and Castles North route begins in Edinburgh, capital city of Scotland, crossing the Firth of Forth into the Kingdom of Fife with its beautiful countryside.

The route then follows the coast north passing through Dundee, numerous fishing villages and historic sites, such as the cliff top ruins of Dunnottar Castle, on its way to Aberdeen.

From Aberdeen there are ferry links onwards to Lerwick in the Shetland Islands, and Kirkwall in the Orkney Islands.

Also features detailed inset maps for the major towns and cities and linking routes that could be ridden for day excursions, including coastal rides in Fife and the Deeside way in Aberdeenshire.

It goes past the beaches and fishing villages of Fife and Aberdeenshire, finishing in Scotland’s third largest city of Aberdeen.

The map is weather-resistant, double-sided and well-designed and comes complete with a plastic wallet to keep it clean and dry as you ride.

The Edinburgh to Aberdeen map – Sustrans